When we talk about biomass in agriculture, it is all referred to plant residues, food and grapes production. The estimated total of produced biomas in Serbia, is around 12.5 million tons per year, of which 9 million tons is produced in Vojvodina (72%).

¼ of biomas can be used for plowing or as a spreader for the animals, in order to increase soil fertility.

¼ can be used to produce animal food.

¼ can be used for production of themal energy.

¼ can be used for other purposes.

Out of the total biomas that was meant for heating purposes 2.8 millions of tons can save up to equivalent amount of 0.9 millions tons of extra light heating oil. The same amount of diesel is being spent in the entire agricultural production in Vojvodina.

The data was taken from study “Potentials and possibilities of briquetting, and pelleting biomas waste in the province of Vojvodina”, the Secretariat of Energy and Mineral Resources of Vojvodina in 2007. 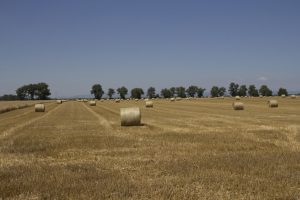